Once again we took part in the annual JOTA event, operating over the weekend 15/16thOctober from Scout HQ in Finnart St.

The JOTA Station was staffed by Explorer Scout Stephanie McCann, Active Support members Bob Lynch, George & Kai McClintock and Guide Leader Eunice Lynch.  This year was our most successful JOTA event ever. We made contact with 16 Scout Radio stations across the UK, Scout Radio stations from Finland, Denmark, Belgium, Netherlands, Switzerland, Norway, Italy, Portugal, Luxembourg and for the first time ever  a Japanese Scout Radio station located in Akita .  We were also able to contact  radio operators in countries from all over the world including our own Royal Observer Corps operating from an old WW2 Bunker. 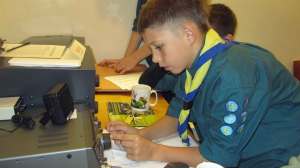 Scouts from 32ndGreenock & District spoke with their Swiss counterparts and exchanged greetings messages. The Swiss Scouts were very interested to hear about the Scouts from this area who attended the World Jamboree.  Our Scouts all crowded round the radio to listen to a Swiss Scout tell them about Scouting in Switzerland, including details about their troop.

In another first for us, Stephanie made contact with the Gilwell Park Scout Radio Station – GB2GP, the UK Scout HQ Station.

There was a lot of excitement and cheers when the contact was made with the Scout Leader from Japan!  Bob had a long chat with Scout Radio Operator Motoi from Akita who told him about his wife Izumi and son Heiwa who are also members of the Scout Organisation and Radio Operators.