The JOTA is an annual event in which Scouts and Guides all over the world speak to each other by means of amateur radio contacts. Scouting experiences are exchanged and ideas are shared, via the radio waves.

When Scouts want to meet young people from another country they usually think of attending a World Jamboree or another international gathering. But few people realize that each year about half-a-million Scouts and Guides “get together” over the airwaves for the annual Jamboree-on-the–Air (JOTA). Modern communication technology offers Scouts the exciting opportunity to make friends in other countries without even leaving home…..

Since 1958 when the first jamboree-on-the-Air was held, thousands of Scouts and Guides have “met” each other through this event. Not only is it fun to talk to Scouts from other parts of the world but it provides also a chance to find out about other countries and about Scouting elsewhere. Many contacts made during the JOTA have resulted in penpals and links between scout troops that have lasted for many years.

With no restrictions on age, on the number that can participate and at little or no expense, the JOTA provides an opportunity for Scouts and Guides to contact each other by amateur radio. The radio stations are operated by licensed amateur radio operators. Many Scouts and leaders hold licences and have their own stations, but the majority participates in the JOTA through stations operated by local radio clubs and individual radio amateurs. Today some operators even use television or computer linked communications.

Date and duration of the event 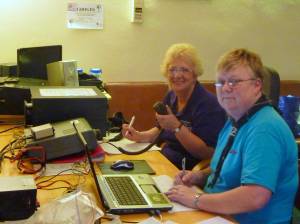 At the 53rd JOTA the World Organization of the Scout Movement (WOSM) deputy-sceretary general Jim Sharp held the closing speech, transmitted on HF and Echolink.
Click here to download (in mp3 formst) and catch a glimpse of the HF atmosphere at HB9S.

The World Organization of the Scout Movement (WOSM) is an independent, worldwide, non-profit and non-partisan organisation which serves the Scout Movement. Its purpose is to promote unity and the understanding of Scouting’s purpose and principles; while facilitating its expansion and development.

It has had consultative status with the United Nations Economic and Social Council since 1947. It is recognised by the majority of UN agencies and governments and works in collaboration with other agents in the world of education and civil society.
The organs of the World Organization are:
The World Scout Conferences
The World Scout Committees
The World Scout Bureau.