It is high-tech hide and seek; a sport for the 21st century!

GPS was initiated in 1973 by the U.S. Department of Defense as the Navigation Satellite Timing and Ranging (NAVSTAR) system. NAVSTAR used 24 satellites to aid in pinpointing locations around the world. For national security reasons, an intentional error called selective availability (SA) was programmed into GPS, limiting accuracy for civilians to about 300 feet ? about the size of a football field. On May 2, 2000, SA was disabled, improving accuracy to within six to 20 feet for everyone who wanted to use GPS technology.

A computer consultant named Dave Ulmer wanted to test the accuracy of the GPS signals. On May 3, 2000, he hid a bucket in the woods near Beaver Creek, not far from Portland, Oregon, and he measured the bucket’s coordinates with a GPS unit. Ulmer then posted its coordinates on the Internet for a user’s newsgroup and called the search for it the “Great American Stash Hunt.”

The bucket contained a number of prizes and a logbook for seekers to sign. For those who would find the stash, there was only one rule: “Take some stuff. Leave some stuff.”

It only took a few days for Internet users to find the stash and talk about it online. Other stashes were hidden, and by the end of the month, the term geocache was coined to describe the hidden “treasure.”

The word geocache combines geo (for “earth”) with cache (for “a hiding place” or for “computer storage”). Geocaching was adopted as the official name of the game on May 31, 2000.

You might consider geocaching a sport or a game. Either way, the number of its participants has grown exponentially since the beginning of the millennium. Today, there are more than one million, and counting, active caches around the world.

The Radio Team at a cache

Geocaching has a number of guidelines – not rules, as such. You need very few things in order to play.

Basically, someone hides a box containing treasures (books, CDs, videos, key chains – limited by imagination only), noting the coordinates of the hiding place with a GPS unit. The hider then posts those coordinates on the Internet – www.geocaching.com is one of the sites on which to post and find locations.

Seekers who want to look for hidden treasure in the area of the hiding place will find the posted location on the Web site and use his or her own GPS unit to try to find it. When the seeker finds the hiding place, he or she signs the enclosed logbook and swaps treasure. The seeker can also log the find on the original site on which the coordinates were first listed.

Using a GPS Receiver on a winter hike

It sounds simple. But terrain and the nature of the area in which the treasure is hidden can make the seeking difficult.

Checking our bearings on Conic Hill 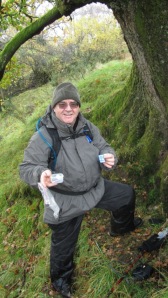 We found another cache