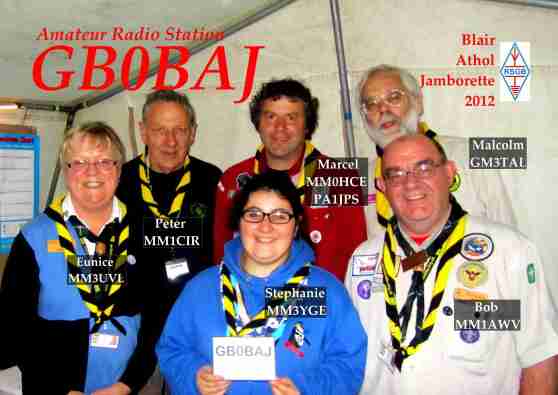 A  Radio Amateur team were invited to carry out activity bases at the 2012 Blair Atholl Scout Jamborette. This event takes place every two years, with the idea that Scottish Scouts work together with overseas contingents to foster team spirit at the camp and develop long term International friendship.

The GB0 BAJ Team was made up of members of our Club and the Kingdom Amateur Radio Society (KARS) which is based at Fordell Firs in Fife. One other operator joined the team, a Scout Leader from the Netherlands.

During the period from Friday 19 July to Monday 23 July 2012 some 160 visitors came to the radio tent to find out about Radio Scouting. The Scouts found out about Morse code and the Phonetic Alphabet, they also had the opportunity to  pass a short message around the campsite as well talking to Scouts  and Radio Amateurs in other countries. The final activity was the completion of a Morse code treasure hunt around the campsite.

During the four days of operation the team managed some 450s QSO’s (radio contacts) to some 67 countries including Japan, Australia, South Africa, USA, a number of countries in South America and most countries in  Europe. From a Scout point of view the best contact was with HB9 JAM, a Swiss Station also operating a Jamboree Camp. Scouts in both countries were able to discuss activities and the weather, while the weather in Scotland was wet and cool, at the Swiss Jamboree things were hot and sunny.

The GB0 BAJ main station at Blair Atholl used an Icom 7600, an Acom linear amplifier and an HF beam. Thanks to Icom for the loan of the 7600, the GMDX Group for the loan of the HF Beam and Serteam Design Services for transport and logistics. Thanks also to individual members of the team for bringing their own or local club equipment.

Would we do it again? The answer must be a resounding yes; the ability to tell a large number of young people about Amateur Radio was an opportunity not to be missed. The team members worked well together and soon built up a good team spirit, sharing the operating and activity bases. The team have received an enquiry to undertake a similar operation in 2013. Watch this space!!!